Must be rank of PFC or higher, own Squad, and it is recommended to have attended five operations or more. 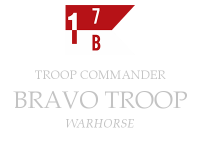 1/B/1-7 Platoon Sergeant Position Opening
​
Bravo Troop 1-7 is currently accepting applications for the billet of Platoon Sergeant. If you do not meet all of the requirement but are still interested, you are encouraged to submit an application regardless. 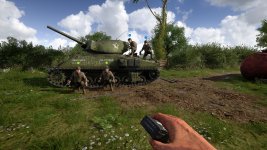 Troopers of the 7th Cavalry,

It is with a heavy heart we have had to see so many of our friends in the Squad Area of Operation depart our beloved community. We can appreciate that, to many of you, this will be deeply concerning and that you will have many questions.

We ask that during this time you have some appreciation that your immediate chain of command may not have the full details and will be just as concerned as you are. We would like to address some of those concerns and to make clear the Regiment’s position on this issue.

Echo Company, Second Battalion is solely focused on the Squad AO. It has been successful and is made up of lots of passionate players. They state that they have made many attempts to address several issues through the primary and secondary billet chain of command without them being addressed.

One such issue of contention has been the quality of user experience on the Public Server, specifically high pings (anecdotally reported as higher than 2000ms) and incorrect rumours about the server hosting specifications that we provided funded by donations through our partner OVH.

Yesterday evening, the Squad AO, attended by members of Regimental and Battalion staff ran a test of the public server to ascertain data which would help refine the problem-statement associated to the reported issues. This is not the first test, but previous tests had been inconclusive in the identification of issues. We received valuable diagnostics including identification of a ping increase unilaterally for most players after reaching the 80-player mark.

Once this test had concluded, an emotionally charged, passionate meeting lasting 3.5 hours began. In that meeting many tense and difficult moments arose, with hostile language and discourse shared between all parties. It is regrettable that things were said in the heat of the moment which will for many have a lasting impact on those present.

It is apparent to the 7th Cavalry’s leadership that many of those...

2nd Battalion has an opening for a single staff officer.

the requirements for this position are here, https://wiki.7cav.us/wiki/Battalion_Staff_-_Duties_and_Responsibilities.

you may apply if you are currently(or formerly) at the rank of captain.

Please send your intent to apply for this position to myself, LTC. Larouche, and SGM. Terlizzi via pm.

PAFs should now be online. If there are teething pains, please submit an S6 ticket

PAFs are now availible via the link in the resources tab at the top of the website, via the link 'https://7cav.us/form/'

The key difference here between the old site and this new one, is how the 'PAF' is handled at the trooper/submitter level.

Now it's just one form (with a convenient link https://7cav.us/paf) where you enter the relevant details. For receiving staff, there is one forum to watch - https://7cav.us/forums/363/

Once you process a PAF using the relevant tools, or just action them yourself, please move the PAF thread to either 'Processed or Cancelled'

If you have any questions, you can reply here. For help or technical issues, please use an S6 ticket.
Announcements
Top