Register Log in
You are using an out of date browser. It may not display this or other websites correctly.
You should upgrade or use an alternative browser.
New ARMA 3 Tactical Realism Server (Domination Mission File)
NEW ARMA 3 TACTICAL REALISM SERVER The 7th Cavalry Gaming Regiment invites you to the newest version of our Arma 3 Tactical Realism Server, which includes being on a new IP (IP: 45.59.151.34...
Rolling Out With HLL Armor
Alpha Company is tasked to provide a composite, combined arms force to the 2nd Battalion. The Company operates in the Hell Let Loose area of responsibility. The Company combines several disparate...

The S3 Department has an opening for an additional command staff position.

If there are any questions, please contact COS Burgundy.

The S5 Department has an opening for the S5 2IC position.

We have the memorial details for Muska’s (https://7cav.us/threads/10837/) funeral proceedings. As a regiment, General Chance.JT is organising 10 trees to be planted, and relevant info sent to the family, on behalf of us all. In the mean time, I’d like to organise an additional item from the regiment to Muska’s family.

We have a way to send notes of remembrance. I want to collate any and all messages you have together, with a pre-text from the regiment first. We only have a short time to put this together. Around 48 hours, so please pass the word out to those you see in your squads and team speak.

Please write your message in this thread, and I’ll collect them together along with your Cav name in the final message from the Regiment.
Announcements

Currently we are looking for more staff members for this department. Minimum of rank of PFC.
The following are the requirements. Please reach out to me with your interest!

If you're interested, please PM me for more information, or fill out a PAF.

The passing of a brother

It's with great sadness that I inform you of the passing of Specialist Brendan Muska. To his Squad mates in 4/2/B/1-7, and the rest of B/1-7, my thoughts & prayers and those of the Regimental HQ are with you. As a regiment, times like this can be very difficult.

For the month of October as a minimum, I ask that you all use the special memorial avatars created.

As always I ask that folks speak out when you need it. The 7Cav has it's ups and downs as a brotherhood, and this is one of those times where we need to stick together.

Once I hear more information on funeral proceedings, I will share them in this thread.

Since 2019 the 7th Cavalry has had the pleasure of supporting the Stack-Up in tandem with other communities and content creators just like us! The charity aims to send video games, equipment and other paraphernalia to current serving veterans in their deployment zones, and disabled veterans at home around the world!

This has been a program so near and dear to our own hearts as many of our members, and past members are current serving, or past veterans themselves. We wish to continue supporting the Stack-Up and StOp (Stack up Overwatch Program) suicide prevention program. In 2021 the 7th Cavalry has managed to send out one supply crate to a Veteran, and a second crate that has been paid for and is awaiting shipment to another waiting Veteran! I would like to take the opportunity to share a testimonial from Sergeant First Class Rivers:

"Hi, I'm retired SFC Rivers. I spent 20 years in the army. I devoted my time while in the service to taking care of Soldiers. I was stationed at Fort Stewart GA, 385 MP BN. I was the BN Chemical Specialist. While working in the 385th MP BN, I took a lot of Soldiers under my wing and mentored, coached and guided them in the right direction. I did it for several reason, one as an NCO I felt like it was my responsibility to take care of soldiers and two coming up in the ranks I did not get the coaching and mentoring that I needed from my NCO's, So I said when I become an NCO I going to be there for my Soldiers even though I didn't get any mentoring. Even to this day since I've been retired my Soldiers still call me and I still mentor them because even though I'm retired in my mind and heart I'm a NCO for life and taking care of soldiers is what I do!"
Click to expand...

​
Thanks to the contributions of our members we were able to give back to the veterans who have...
Announcements

If interested in applying, please fill out the Department Application PAF or PM Me and we can talk about your furture Duties .

If you have any questions about the, S7 HLL SOI, or anything in general, feel free to PM myself, SSG.Sven.S

Deadlines for Applications
Overview of the Position 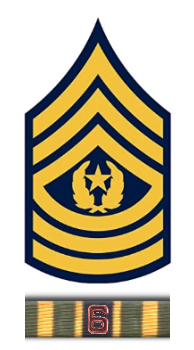 To all who shall see these presents, greeting:
Know ye that reposing special trust and confidence in the fidelity and abilities of

I do hereby appoint him

Command Sergeant Major of the Regiment

Given by my hand on this the 22nd Day of September, in the year of our Lord Two Thousand and Twenty One

​
S5 Position Openings​
The S5 Department has currently has openings for the following roles:
Minimum requirements for all roles:
Public Relations Lead expectations
Graphics clerk expectations:
How to Apply:

If interested in applying, please fill out the Department Application PAF and state your preference of AO if applicable.

If you have any questions about the Clerk roles, S5, or anything in general, feel free to PM me or Ronnings.P