Status
Not open for further replies.

Server and Mod Info Below.
​
7CAV MEMBERS: DO NOT SIGN UP ON THIS THREAD. USE THE OPERATION POST HERE. THIS POST IS MERELY FOR PUBLIC VISIBILITY. 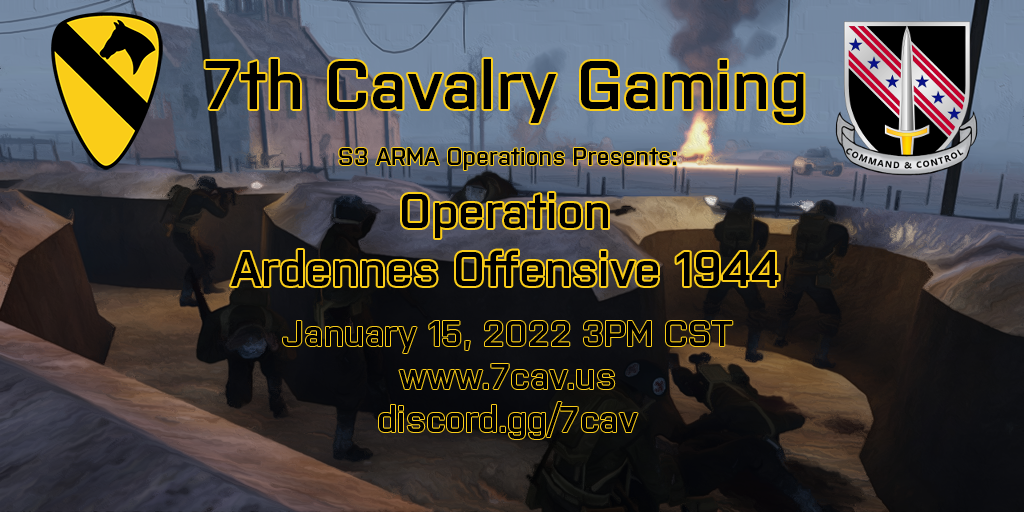 This special WW2 event operation will be hosted on the 7Cav Arma 3 Tactical Realism Server.

If you have questions on how to setup the mods, read below or ask within your CoC!​

It is the morning of December 16th, 1944. The Wehrmacht has launched a massive offensive across the entire Ardennes region, having taken Allied forces completely by surprise. This would quickly become known as "The Battle of the Bulge". In an attempt to circumvent heavier Allied defenses in and around Montherme itself, the Germans have blitzed across the lightly defended River Semois in an effort to force a crossing of the Meuse further south. Positioned directly in the path of the German advance along the River Meuse is the U.S. 110th Infantry Regiment of the 28th Infantry Division. While the 112th Infantry Regiment to the north-west has thus far kept German forces from seizing key bridges along the river, the 110th finds itself in a much worse situation. Being the only regiment of the 28th ID on the eastern bank of the Meuse, the 110th is responsible for a front spanning nearly 11 miles.

Positioned on the western end of the 110th's frontline is Easy Company, 2nd Battalion. Within the area occupied by Easy Company, the only viable roads leading south run through the towns of Le Jourez and Saint-Leger. The terrain along the route should limit Axis armor primarily to the roads. As of 0650 hours, 3rd and 4th platoon's positions to the north have been overrun and the village of Le Champ De Trou has been secured by Axis forces. Their forward elements are expected to reach 1st and 2nd platoon's lines at Le Jourez by 0715.

The remnants of Easy Company have extensive ramparts to utilize in the defense of Le Jourez and Checkpoint Able. Should Checkpoint Able fall, there are other intersections which serve as vital junctions, marked Checkpoint Baker, Checkpoint Charlie, and Checkpoint Easy, with the town of Saint-Leger itself serving as Checkpoint Dog; the last line of defense on the road to battalion headquarters.


Although based in history, this operation has a few "alt-history" elements. The more historically and geologically adept among you may have realized a couple things different from actual history in the above briefing. For the sake of the operation, we are assuming things are slightly different than actual history; namely that the frontline at the start of the Battle of the Bulge is on the Meuse River itself in this instance (Montherme Winter 1944 is one of the only suitable maps we have for a Battle of the Bulge OP); but I will go over the real history for those of you interested.

Firstly, the frontline on December 16, 1944 when the Battle of the Bulge officially began was quite a ways east of the Meuse. Though the River Meuse bridges were an important target for German forces during the offensive, they ultimately never reached any of the bridges and only came within visual distance of the River on December 22nd and 23rd, over a week after the start of the offensive, at the furthest extent of their advance.

The 112th Infantry Regiment, the most northerly of the 28th Division's regiments, held a continuous line and prevented German troops from seizing and utilizing the Our River bridges around the town of Ouren for two days until the regiment had to begin withdrawing westward due to mounting losses.

The 110th Regiment of the 28th ID fared much worse, as it was spread so thinly that its positions were easily bypassed entirely by advancing German columns. Additionally, the 110th Infantry Regiment was responsible for an 18-kilometer front while it's 2nd battalion, half of the entire regiment(including Easy Company), was withheld as the divisional reserve. Nonetheless, the 110th Infantry Regiment offered stubborn resistance against superior forces and threw the German schedule off by several days. German Panzer columns attacked outlying villages and widely separated strongpoints held by the 110th, and bitter fights were had for every position. It would ultimately take four days for German forces to reach the outskirts of Bastogne, with the 110th having bought enough time to allow the 101st Airborne Division and elements of the 9th and 10th Armored Divisions to take up positions in Bastogne early on December 19th. Almost everyone is familiar with the 101st Airborne Division being the "Heroes of Bastogne" who prevented German forces from capturing the town, but the lesser known role of the 28th Infantry Division is what made the defense of Bastogne a possibility.
OPORD:


Company CO and XO have their own radios. Infantry squads are x10 men with an SL, Assistant SL, Radioman, Automatic Rifleman(BAR), Ammobearer, Combat Medic, Rifleman (AT), x1 Rifle Grenadier and x2 Riflemen. While squad-level radiomen and per-squad medics are not historically accurate, they are included for gameplay convenience. Nobody wants to get shot and then go sit at a company aid station for the rest of the OP. Platoon and/or company staff are free to distribute medics as they please if they so wish; by default they are included attached to each squad.

Each platoon has a single marksman, in their 1st squad. Additionally, each platoon has 2 M1919A4's and 3 spare bazookas available to hand out. Fire-teams are not pre-configured; it will be up to squad leaders to divide their teams. Generally, rifle squads operated as a whole, with the teams being utilized for fire and maneuver if necessary. However, if the rifle squad would be divided, you would have a Rifle Team with the ASL, Grenadier(s), and Riflemen, and then you'd have the BAR Team with the SL, Automatic Rifleman, Ammo Bearer, and everyone else. Fireteams in WW2 were not considered "basic units" and were more akin to situational concepts. I am testing if any of you actually read this. Pat yourself on the back if you're reading this.
There are 71 total slots. At time of briefing being concluded, if attendance is below ~50 people, Company HQ and 2nd Platoon may be folded. In this case, 1st platoon will be augmented with a 4th squad and additional stragglers will be added to existing squads in 1st Platoon as riflemen, for a max of 12 people per squad.

In essence; if attendance forbids two platoons, the force will be reorganized into one platoon with x4 12-man squads.
LEADERSHIP SIGNUP LIST:

From Saint Louis, Missouri
"My left is broken. My right is in retreat. My center is faltering. I shall attack."
Sergeant Active Duty S3 HQ S3 Staff

I will be attending as Easy 1-2 Radioman

Kiser.C said:
I will be attending as Easy 1-2 Radioman
Click to expand...

Heads up, this isn't the sign-up thread
S3 2IC

ALCON: The time on the post has been updated as the OP is being pushed back 1 hour to prevent overlap with the Command Staff Call on the 15th.
S3 2IC

Status
Not open for further replies.